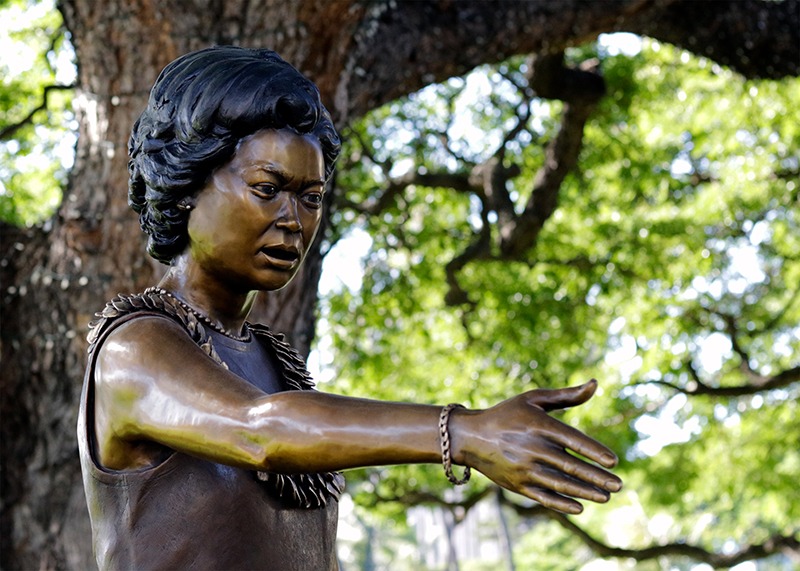 “Patsy T. Mink,” a bronze sculpture by artist Holly Young, was dedicated at the Hawaii State Public Library December 6, 2018, which would have been U.S. Representative Mink’s 91st birthday.

Patsy T. Mink is a 1.2 life-size scale bronze sculpture of Patsy Mink standing and speaking with arms outstretched to symbolize her love and engagement of Hawaii’s community. It is located in a seating area near the Hawai‘i State Public Library where she spent much of her early career reading to her daughter, Wendy Mink. Throughout the seating area are plaques containing quotes from Patsy Mink’s political career that highlight her tireless advocacy for civil rights, women’s rights, and the integrity of the democratic process.

The 2013 Legislature passed Act 281 appropriating funds for the State Foundation on Culture and the Arts to commission a permanent, three dimensional work of art to portray the life, vision, accomplishments, impact and legacy of the late United States Representative Patsy T. Mink so as to properly honor her memory and to utilize her example as an inspiration for current and future generations.

United States Representative Patsy Takemoto Mink served a total of twelve terms over the span of her political career from 1956 to 2002 representing Hawaii’s First and Second Congressional Districts. She was the first woman of color to be elected to the U.S. House of Representatives and co-authored the Title IX – Amendment of the Higher Education Act which was eventually renamed in her honor as the “Patsy T. Mink Equal Opportunity in Education Act.” On November 24, 2014, President Barack Obama posthumously awarded her the Presidential Medal of Freedom, the nation’s highest civilian honor.

Additional Information in the Library

A temporary display inside the library created by library staff provides additional information for visitors about the career of U.S. Representative Patsy T. Mink.

Holly Young chose an education in chemistry and philosophy from Dartmouth College, St. John’s College, and Cornell University for a professional career providing chemistry consultation and research. During her late thirties she felt compelled to explore her lifelong attraction to art and quickly unfolded her talent for sculpting. Universally appealing, Ms. Young’s sculptures may be found in public and private collections throughout Hawai‘i and around the world. Both the Queen Kapi‘olani monument at Queen Kapi‘olani Regional Park and Makua and Kila fountain at Kūhiō Beach were commissioned by the City and County of Honolulu. Holly lives in Laupāhoehoe on Hawai‘i Island where she raised her family and continues to be an active volunteer for Laupāhoehoe Community Public Charter School.

The sculpture was funded through the Art in Public Places Program of the SFCA, which receives one percent of the construction and renovation costs for state buildings to integrate art into the built environment of Hawai‘i.

About the Art in Public Places Program

The Art in Public Places Program (APP Program) was created to strengthen the Hawai‘i State Foundation on Culture and the Arts’ capability to stimulate, guide and promote culture and the arts through the field of the visual arts. The APP Program seeks to: enhance the environmental quality of state public buildings and spaces throughout the state for the enjoyment and enrichment of the public; cultivate the public’s awareness, understanding and appreciation of visual arts in all media, styles and techniques; contribute toward the development and recognition of a professional artistic community; and acquire, interpret, preserve and display works of art expressive of the character of the Hawaiian Islands, the multicultural heritage of its people, and the various creative interests of its artists. Artwork in the Art in Public Places Collection can be viewed online in the Art in Public Places online catalog as well as the Public Art Archive (www.publicartarchive.org).

The Hawai‘i State Foundation on Culture and the Arts (SFCA), a government agency administratively attached to the Department of Accounting and General Services (Hawai‘i Revised Statutes Chapter 9), was established by the Hawai‘i State Legislature in 1965, to promote, perpetuate, preserve and encourage culture and the arts, history and the humanities as central to the quality of life of the people of Hawai‘i. SFCA funding is provided by the State of Hawai‘i and the National Endowment for the Arts.

Subscribe and keep in touch with news from the SFCA and the Hawaiʻi State Art Museum.